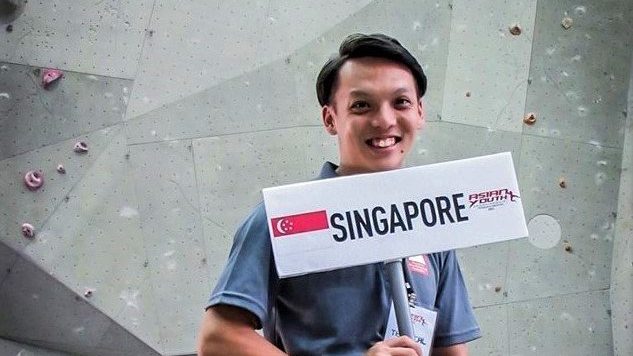 You’ll know if a route is good when climbers sing praises about it after they finished and start recommending it to others. But you can also tell if a route is bad when climbers curse and swear the entire way up. Maybe that’s the reason why there is so much swearing when people climb my routes. Route setting is an art that requires a lot of planning, creativity, and vision. So when you get stuck at the crux is not because the route was bad is because you are not doing it right. Or maybe you have to consider the fact that you are weak…

Shaun is an IFSC route setter and had racked up a decent list of hard sends. Redpointing Bourinator 8a in Ceuse France, Gin and Tonic 8a+, and Single Life 8a in Yangshuo.

This is the Q&A session with Shaun to find out more about the art of route setting and what he had been up to.

5c – How did you become an IFSC route setter?

Shaun – I personally do not really like to comment on grades when climbing indoors especially when it comes to bouldering, but it is a necessary evil that must be done because the general public that climbs indoors wants to know what level they are climbing at. And after which, what they can focus on next when problems/routes are getting too easy.

Grading also depends on which point of my training cycle I am at. To put it simply, if I am in the middle of a training season, I will usually get tired more easily and hence harder problems/routes will shut me down quicker/more easily. So, when we are setting, we also have to take into consideration the fatigue level of the group of setters.

The type of holds obviously makes a route harder/easier. But it also means that the type of holds that you are good at may make the route easier for you than others. Generally, ladies usually have smaller hands than guys, therefore making crimps easier for them. And it works the other way too. Guys have bigger hands, making big pinchers and slopers easier for them to hold on to.

A very good example is me. 😂 I have big hands. My weakness is crimps, my strength is big pinchers and slopers, therefore I am better at climbing problems involving these holds and usually find them a lot easier than problems with crimps.

Shaun – Hacking. Simply because it just shows that I can’t do my job well. My job is to make people do what I want them to do, but if I fail to achieve it, then it makes me a bad setter. (Sounds wrong and like a control freak but yes, that’s a simple job description of a route setter) On the other hand, every gym needs easy routes. And more often than not, we spend the majority of the time in the gym setting easy routes so a majority of the people in the gym can climb them.

5c – What is the one thing that makes route setting satisfying to you?

Shaun – The most satisfying thing for me is when climbers finally understand how to do the problem. A lot of times especially when bouldering, the moves and coordination/complexity behind the problems take a lot of practice/attempts to solve. Seeing others find the right solution to finish the boulder problem and learning from their mistakes on the previous attempts make it the most rewarding for me.

5c – Have you set a competition route that no one was able to send? Which competition?

Shaun – I don’t think so. Or maybe I don’t remember because I have set too many!

5c – What kind of routes (eg: Balancy or dynamic) pose the biggest problem to competition climbers?

Shaun – I would say the new school boulder problems (parkour-style) are most of the time, the biggest problem that athletes will face. Even with the massive use of social media to look at how other people climb these problems, you may not even be able to do it because:

1 – Lack of facilities (gym size, holds, volumes etc)
2 – Lack of strength/technique
3- High level of coordination/body awareness is needed in these kinds of problems
4 – Lacking the understanding of movement and biomechanics
5 – Sometimes being strong is not enough, you have to be good

5c – Do you prefer setting lead or boulder routes? Why?

Shaun – I prefer setting boulders mainly because it forces me to think out of the box and be more creative than usual.

5c – What are the most important criteria a good route setter must-have?

Shaun – I would say creativity, the ability to accept criticisms, and willingness to keep learning.

5c – Is there any difference when comes to setting competition routes for men and women?

Shaun – To me, this is a yes and no answer because it depends a lot on the style of the problems.

5c – Should men and women climb on the same route? Why?

Yes, because in the gym, when ladies climb with the guys, they can become strong very fast. They are forced to climb in a style that ladies don’t do. Ladies can pick up tips, learn the physical traits, and gain the ability to climb more dynamically and be burlier.

No, for competitions because, we want to see results in the competitions, and more often than not, men’s problems are harder than women’s. In my opinion, if the ladies were to climb the same problems, we may risk having plenty of people being tied in the same position and not have ideal results for competitions.

5c – What was the biggest regional or international IFSC climbing competition where you were a route setter?

Shaun – The most prominent competition that I have set for to date would be the 2018 Asian Championships in Tottori, Japan.

On an organizational level, I personally feel that this competition is what all organizers should aspire to achieve. The competition was very timely. No delays for all 5 days of the competition. Everyone was very welcoming. They had many translators on standby to help the athletes. Food trucks were stationed outside all the event. All areas were clearly demarcated and cordoned off.

5c – When and where is your next IFSC route setting assignment?

Shaun – The next IFSC event that I’m nominated to set for will be the 2019 Asian Youth Championships in India. But as of the latest information I got, the competition is suspended until further notice from the organizers. So….. ¯\_(ツ)_/¯

5c – Which gym can we go to try out routes that are set by you?

Shaun – Currently I am a freelance setter for Onsight Climbing Gym, Boulder World, and Climb Central.

The sport of rock climbing is growing in Southeast Asia but it is still a long way from the success of Japan or Korea. Your support and participation will help to grow our sport and our community.

Join 5c Climbers to help grow the Asia climbing community. Follow and like us on Facebook to get updates on our latest climbing articles and news.