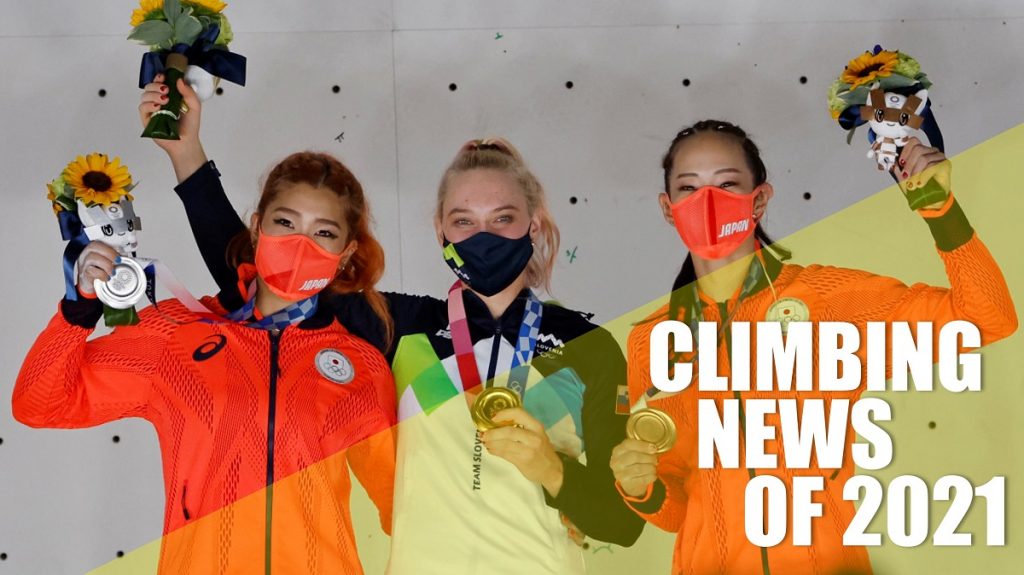 The year is nearing its end although COVID19 is still with us. 2021 had been a great year for climbers. Let’s look back at the climbing news that made the headlines for 2021.

There is no bigger news for climbers than having sport climbing as an official sport in the Olympic games. Although the game’s combined format was controversial with just 1 gold medal up for grab. However, it made great drama that kept us glued to our TV.

For the men’s combined the expected winner was very much a toss-up, as the best climber in the world, AKA Adam Ondra was not the top pick for speed and bouldering. In the end, it was the underdog Alberto Gines Lopez from Spain winning the first-ever sport climbing Olympic gold medal. Although Alberto is a well-deserved winner the ultimate title-deciding climb was on the last climb in the men’s combined finals.

The climb that determines if Adam or Alberto walks away with the gold medal. Jakob Schubert’s final climb of the competition kept us at the edge of our seats. He is the only climber who topped the lead route won himself a bronze medal and shattered Adam Ondra’s hope for a gold medal.

The women’s final was a different story. With Janja Garnbret being the hot favourite to win both bouldering and lead event her gold medal is already in the bag before the Olympic games start. And of course as always with Janja, she never disappoints.

Finishing with a decent result in speed and follow-up with crashing performance at both the bouldering and lead all but guarantee her title as the first Olympic sport climbing women’s gold medalist. For Akiyo Naguchi, it was a fairy tale ending to her immaculate climbing career with a bronze medal as she will walk away from competition climbing after the Olympic games.

The 2021 World Cup competitions had seen a resurgence of the USA climbing team with Sean Bailey and Natalia Grossman leading the charge. However, it is Natalia Grossman who had been the outstanding performer with amazing results in bouldering by winning the world championship crown and rank number 1 for the overall bouldering world cup result. Her IFSC competition performance in 2021 is so good that it’s good enough to be considered Janja Garnbret worthy.

2022 will be an exciting year as we can finally see a climber that can give Janja Garnbet a run for her money.

Yes, our favourite hardcore ropeless climber Alex Honnold got married last year. As if being a husband is not exciting enough, he will be a father really really soon. I will like to venture a guess, it is most likely because of the pandemic lockdown that resulted in this. Well, as much as we like to see Alex free soloing, seeing him changing diapers and cleaning up baby crap may be fun to watch.

The grade debate. What should the grade of the world hardest (apart from Silence) route Bibliographie be? 9c says Alex Megos. But then Stefano Ghisolfi came along climbed it and suggested a downgrade to 9b+ and Alex Megos agree. So there you go the next time you are having an argument with your climbing buddy about the gym route grade being over graded… well real climbers only downgrade routes not up.

Climbing had not seen much innovation that is worthy of mentioning. Yes with the auto-belay system, we had come a long way since the days where speed climbers are being belay by a human belayer. But we had not seen much innovation since. What we do see every year is a new assist braking belay device or some ultra-lightweight harness and fancy climbing shoe design. Which we don’t really need or want.

However, in 2021 we finally have a breakthrough innovation in climbing. The lead auto belay system by ProGrade allows climbers to lead climb without a human belayer. Now that is an innovation that is worth mentioning.

If this is a title for the GOAT (Greatest Of All Time) Janja Garnbret will win hands down. Her dominance in women’s sport climbing means that achieving the Olympic gold medal is nothing short of a sure thing. However, the climber of 2021 based on 1 specific performance it will have to go to Jakob Schubert. Bringing his A game for one of the most important if not the most important climb of his career.

Topping the route and winning a bronze medal in the end. You cannot ask for a better script to end the Olympic men’s combined finals. Hence the climber of 2021 in my opinion goes to Jakob Schubert.