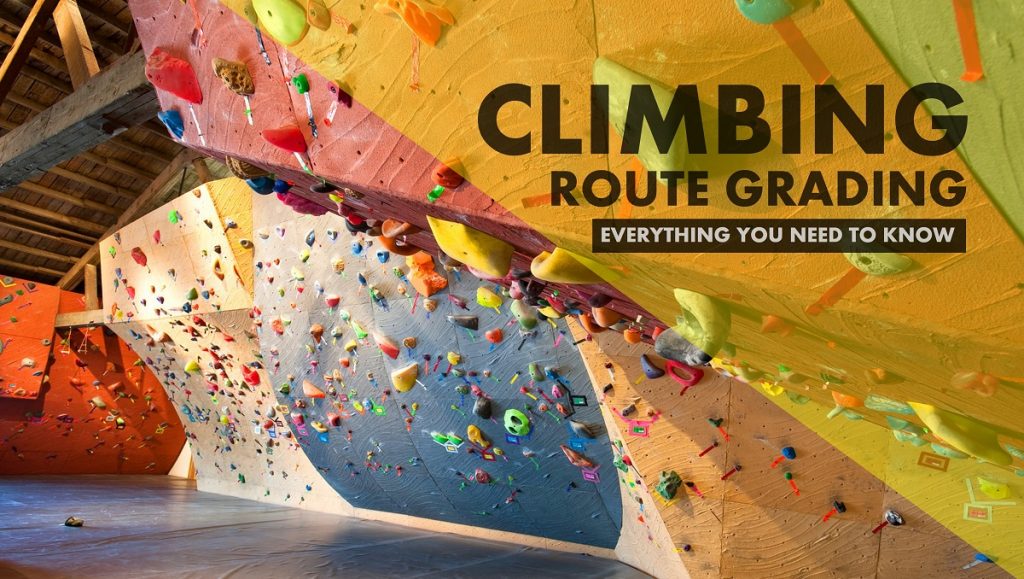 Climbing route grading | Everything you need to know

Climbing route grading how does it work? You had been on a crashing run. Sending hard routes one after another. Then you encounter a route with a grade that is well within your capability. You jump on it thinking it’s going to be a walk in the park but fall after a couple of moves. So what does this mean? Are you really climbing at the level you think you are?

Every climber has a particular style that suits them. If you are agile and dynamic, you’ll do well on parkour-type routes. If you have crazy crimp strength you’ll love routes with nasty crimp holds. Regardless of what style you are good at your ability to send a route mainly depends on how good you are at reading the route.

So how are routes graded? What are the elements that determine the grading of a climbing route?

Difference between indoor and outdoor routes

First of all, grading routes on natural crags and gym routes are quite different. Routes or boulder problems in a climbing gym are set by route setters. The route setters have total freedom in choosing the type of holds and moves they want to create. Every single move can be controlled to force climbers to perform a certain move in order to finish the route.

However, routes found on outdoor natural crags are different. A climber will survey a rock face to identify the possibility of a line up the wall. Once a line is formed the climber will bolt the route climb it and establish a suitable grade. A way to differentiate the two is, a gym route is created while an outdoor route is discovered.

How routes are graded

The difficulty of a route can be based on a number of things. Distance of the holds, sequence of moves, angle of the wall and type of holds such as slopers or crimps etc. The route setter will estimate the difficulty of the route and recommend a grade based on these attributes. Other climbers will come and climb it to validate the grade hence grades do sometimes get adjusted upwards or downwards accordingly (normally downwards).

How good you are at reading routes and planning your sequence is by far the most important skill a climber needs to have. There are routes that can be really easy only if you read the sequence right. Doing a wrong sequence can mess up your hand or feet placement forcing the climber to rectify by going back a few moves, do a difficult hand or feet swap.

The grade of a route is determined by the difficulty of the moves and sequence. If you find that you are having problems finishing a route with a grade that is well within your ability then it is likely you did not read the sequence right. Once you find the right sequence you’ll discover how easy it is and realize what a moron you are for doing it the way you did. The grade is a hint to how much effort you need to put into the route. So if you find yourself sweating it out on a lowly graded route, take a hint.

Crimps, slopers, jugs, side pulls, underclings, gastons, pinches, hand jams and fist jams… that should be all of it. Different types of hold require a different amount of effort. Having strong arms and fingers is advantageous to any climber. However, not all holds require strong fingers. So the type of climbing holds on a route do not always dictate how hard the route is. The difficulty of the moves required to link the holds together is the determining factor. So don’t be deterred by routes with shit loads of slopers or underestimate one stacked with jugs.

Yes, height is an issue when it comes to climbing. Like everything in life, not everyone is created equal. If you are vertically challenged then you will have a disadvantage on routes with big moves. The same goes for freakishly tall climbers when it comes to routes that require high steps or compact moves with crimpy holds. Hence there will always be routes with big moves that are easier for tall climbers than short climbers and vice versa. So for such instances, grades may be biased.

What does the grade tell you about the route

The purpose of having a climbing grade is to indicate to climbers how “difficult” the route is. The difficulty here only encompasses how hard the climbing moves are and how much effort is required to finish the route. The grade does not factor in the mental aspect. However, climbing is a mental game especially outdoors on a natural crag. Exposure of the route, such as the distance and direction of the fall and weather conditions can play on the climber’s mind drastically affecting the climber’s performance. Hence, climbing grades are strictly for indicating the physical demand of the climb.

The grade of a route should be established only after being climbed numerous times in order to identify the easiest and most efficient way to climb it. Because the difficulty of a route can be drastically changed if you miss out on an obscure but critical hold. Hence the grade is to indicate to you if an easy route feels hard, you may be doing something wrong and there is a much easier way to climb it. Or it simply means you are lousy at route reading.

There are a number of different climbing grading systems. For most parts of Asia, the French grading system is used. But if you are climbing in other parts of the world you may need to be familiar with a few other common grading systems so think of it as needing to learn a different language.

A grade is just a number

Like everything in society, it is a sense of pride to be able to differentiate yourself from others and climbing is no different. The climbing grade is a way for climbers to track their improvement and of cause, bragging rights wink wink. Yes, it can be demoralizing to only be able to climb 5c routes while everyone else seems to be climbing much harder staffs. However, a grade is just a number it should not impact how you climb and why you climb.