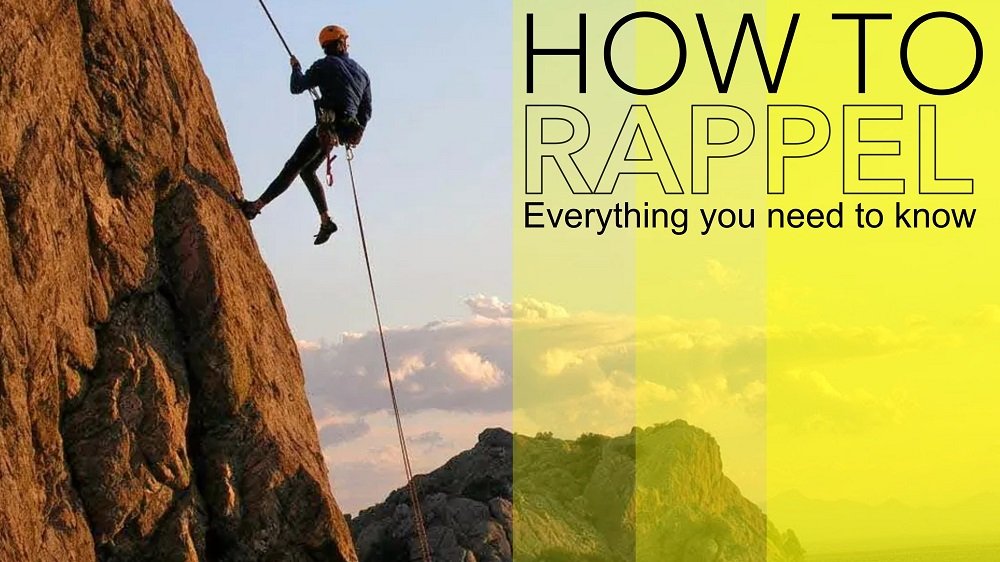 How to rappel – everything you need to know

How to rappel? Rappelling or abseiling (depending on where you come from) is not something many leisure climbers care about. But, if you want to do big wall climbing or even short 3 to 4 pitches multipitch routes. Then rappelling is something you’ll need to learn and practice.

Most climbing accidents happened when rappelling and not while you are climbing. Rappelling is not difficult but accidents do happen when climbers are in a rush or just simple negligence. There are different ways to rappel depending on the situation you are in. Although you can live with just knowing the basics of a simple 2 rope rappel. But you may find yourself in a sticky situation thus knowing different rappelling methods may just save your life.

Things to know before rappelling

How to tie a stopper knot (Double overhand barrel knot)

The autoblock. Also called the third hand. It is a simple hitch that can let you go hands-off on a rappel and not fall to your death. Some climbers may find that it is not necessary to tie an autoblock just make sure you don’t let go of the brake end of the rope. But you’ll never know. What if a giant bee flies at your face or if a rock falls on your head. Think of tying an autoblock like buying insurance cause you’ll never know.

How to tie an autoblock

Use a 5 to 6mm diameter cord with a length of approximately 130 to 150cm. Connect both ends together using a double fisherman knot. Tie a fiction hitch or prusik by wrapping the cord around the rope 3 to 4 times (more wraps more friction) and clip both ends with a carabiner. Clip the autoblock carabiner onto your belay loop on your harness.

When you load your weight onto the autoblock the prusik hitch will tighten around the rope and prevents you from sliding down the rope.

How to extend a rappel

Setting up an extended rappel depends on the type of personal anchor system (PAS) you use. There are many ways to extend a rappel. However, the concept is the same.

One common method is using a 60mm Dyneema sling. Girth hitch the sling to your harness and tie an overhand knot in the middle of the sling. Clip a locking carabiner at the end of your sling and then clip it to the anchor to secure yourself. To extend your rappel, use another locking carabiner to clip your rappel device onto the sling before the overhand knot at the middle. Next set up an autoblock follow by inserting the ropes into your rappel device. Test your rappel set up by loading your weight onto the rappel device. Double-check everything before unclipping your PAS carabiner from the anchor. You are good to go.

The most basic and fundamental rappelling method is the basic rappel. This is the safest and less complicated way to descend.

To rappel, a climber will need to pull the rope through the anchor. Pull until the centre of the rope is at the anchor so that both sides of the rope are of equal length. So if the full length of the rope is 80m, you will only be able to descend 40m. Ensure you had tied a stopper knot on each end of the rope before throwing the rope down. Set up an extended rappel and autoblock and you are ready to go.

Once both climbers are at the lower pitch untie the stopper knots. Put one end of the rope through the anchor and put the rope until it comes off from the top anchor. And repeat the entire process for each pitch until you reach the ground.

Simul-rappel as the name suggest is for 2 climbers to rappel at the same time. This is a rappel method based on counterbalancing between 2 climbers. Having 2 climbers rappeling at the same time can in theory reduce your descending time by half. There are a variety of reasons to speed up your descent. If a thunderstorm is approaching, or it’s getting late and you don’t want to be rappelling in the dark.

Instead of rappelling one at a time. In a simul-rappel, each climber will rappel from different ends of the rope simultaneously. This will drastically reduce your rappelling time.

A tandem rappel is similar to a simul-rappel as both climbers descend simultaneously. However, for tandem rappel, both climbers are rappelling off one rappel device with 1 climber in control of the device. This is very useful when a climber is injured and cannot rappel by themselves.

How to tandem rappel

To set up a tandem rappel. First, the climber doing the rappel will set up an extended rappel for himself. Next, clip your partner’s safety sling carabiner onto your rappel carabiner to load both climbers on the rappel device. The person controlling the descent needs to ensure that both are fully loaded on the device at all times.

Single rope rappel with a tagline

The reason for rappelling on both rope ends is so that the rope can be retrieved. So what can you do if you want to rappel the full entire length of the rope and still be able to retrieve it? Rappelling with a tagline allows you to rappel on one rope thus you can descend using the entire rope length. You can retrieve back the rope for the next rappel with a tagline which is a cordeleltte of a much smaller diameter. Rappelling with a tagline gives climbers the option to rappel 2 to even 3 pitches with a single rappel. This is very useful if you need to make a quick descent.

How to set up a rappel with a tagline

In order to do that, you’ll need to have a cordelette (tagline) that has the same length as your climbing rope. The cordelette diameter should be around 6mm. However, the cordelette is not functioning as a rappel rope. Thus the diameter is not critical, a cord of a slightly smaller (4 – 5mm) diameter can also be used.

Pass one end of the rope through the anchor. Tie an overhand on a bight with a tail of around 60cm (24 inches). Clip a locking carabiner onto the bight and the rope. This will block the rope from sliding out of the anchor. Take one end of the tagline and join it to the rope with a flat overhand knot. To ensure the tagline doesn’t come undone ensure there is an excess tail of 20 – 30cm (8 inches). Set up your extended belay and autoblock. Tie a stopper knot at the rappel end of the rope before throwing the rope down. Before you descend, you need to keep the tagline with you. You can do that by treading the tagline into your rappel device. Or you can clip the tagline into a carabiner on your gear loop.

To retrieve the rope first you need to untie the stopper knot. After that, you just need to pull on the tagline until the rope along with the carabiner comes off from the anchor. 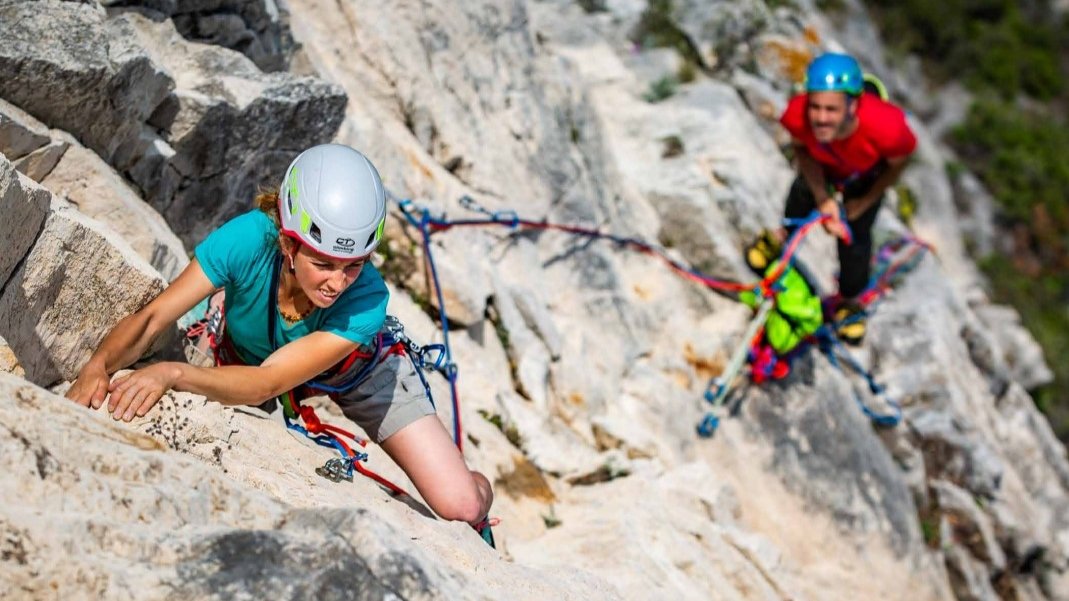 As climbers, we know that shit happens. And it happens fairly often. To ensure you have all scenarios covered here are some extra things to learn to make rappelling easier and safer.

Rappel with no device – Munter Hitch

Dropping gear on a climb is not uncommon. So you need to be prepared for such situations. If you drop your one and only rappel device on a multipitch anchor. What are you going to do? You can tandem rappel with your partner that is one option. But you can also rappel without a device simply by using the rope. By tying a Munter Hitch you’ll be able to descend without a device.

How to tie a Munter Hitch for rappel

Munter hitch can be used for rappeling on either one or two ropes. You can set up an extended rappel using a Munter Hitch and an autoblock. It will function the same way as rappelling on a device.

There are situations when throwing your rope down for rappelling is not the best option. A few examples are:

Setting up a saddlebag for your rope will prevent your rope from getting stuck in cracks or shrubs when rappelling. It also prevents your rope from hitting other climbers that happen to be directly below you.

How to set up a saddlebag

First back stack your rope. Take both ends of the rope and tie a stopper knot on each end. Alternatively, you can tie both ends together with an overhand knot. Start from the rope end and loop the rope over your shoulder. You’ll need to start off with large loops and then reduce the length of each loop progressively. This is done to prevent the loops on the top from sliding under the previous loops. Once done wrap the middle section of the rope coil with a sling and clip both ends of the sling onto your gear loop. Clip the rope coil on the side where your master hand is. Now your saddlebag is all set. As you descend the loops will come off

Rappelling with a saddlebag the rope will be kept neatly by your side and you don’t have to worry about the rope getting stuck caught on cracks or shrubs.

In a perfect scenario, basic rappelling skill is all you need. However, unforeseeable things can happen when climbing outdoors, especially on a multipitch route. Because shit happens and happens when you less expected it. Thus, it is always good to learn different rappelling skills which can save you and your buddy from a lot of misery.

The trick to learning the different rappelling techniques is to first understand the logic behind what you are doing. Next is to practice it with your buddy on solid ground. Once both of you have the skills all dialled in, pick an easy multipitch route and test out the different rappelling methods. Even if you are armed with all the rappelling skills. Nothing substitutes solid research and good planning prior to climbing a multipitch route.

Climbing Rope – Everything you need to know