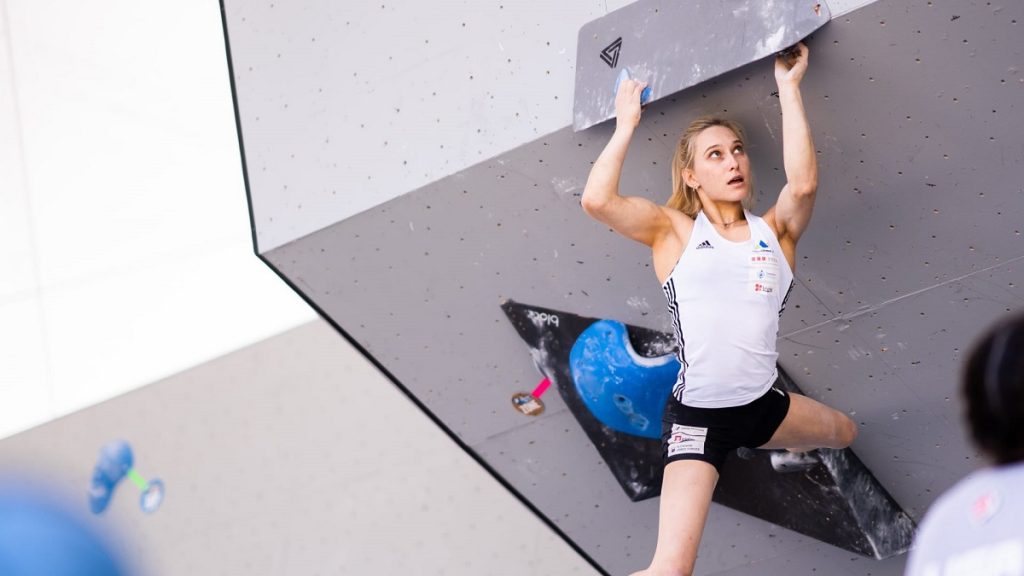 Why is Janja Garnbret the best competition climber ever

Janja Garnbret at the age of 22 is already a legendary climber. With her prodigious victories at every competition, she is setting benchmarks – breaking her own records. The April 2021 IFSC World Cup at Meiringen confirmed that Janja is the torchbearer with abundant light to dazzle in the Olympics.

She flashed all the boulders of the finals skillfully navigating with coordination moves, balancing on volumes, holding crimps and slapping the wall at the end top. We saw her stumble for the first time on the last boulder problem where she had to make another attempt. You can hear the commentator Matt Groom joking, “Janja in the unfamiliar situation of having to climb something twice.” Although he didn’t mean to be smirky, being incredible is what is expected from Janja. And she lives up to it time and again.

The year before the pandemic she won all six Bouldering World Cups becoming the first athlete ever to grab medals in every single event in a year. Throughout 2019 she topped 74 boulder problems out of 78. Unbelievable isn’t it?

Climbing without a chalk bag

Do you think this is what made her rise to popularity? But much before her cumulative annual victory, she had stolen hearts with her enduring climb during Semi-Finals at Vail 2019. She had dropped her chalk bag in the first few seconds before clipping the first quickdraw.

This didn’t seem to upset the lady and she embraced this hurdle with a smile. Her innate calm style. Every time she tried to chalk her fingers she kept laughing at herself; wiping off the sweat on her shorts. Janja topped the route. Not only that she was the only female to complete that route. This put her in the limelight and she became everybody’s favourite. Janja wasn’t elated by that victory as she felt the route was easy. She expressed, “where are those hard lead routes?” on her Instagram profile.

Janja’s fondness for challenges comes from her devotion to climbing. A childhood love that she has nurtured since she met it in 2006. Janja Garnbret was born in the village of Šmartno pri Slovenj Gradcu in Slovenia. She self-discovered her climbing skills and got registered in the local climbing club at the age of 7. Immediately she began competing in the small competitions – not certain of making a series of clean sweeps.

At 14, she entered in Slovenia Youth Climbing Team. The following year she earned her first International lead medal in the Youth Category. By 2016 she was a World Youth Champion – 3 times in a row. A year later she advanced to the senior category and swept the board in Climbing Championships and World Cups. From 2016 to 2021 she has missed a podium only 4 times having 28 World Cup titles.

Focus on what she loves to do

Garnbret may be the queen of Lead and Bouldering lands but Speed is not her cup of tea. You will never find Janja training on Speed routes. She has rarely even qualified in Speed Climbing. Are you wondering how will she survive the Olympics combined pattern? Between all the triumphs there is a secret game plan. She has procured Combined Championships due to her safe wins in the lead and boulder. Focusing on what she loves the most, she is not concerned about the results.

“I don’t climb for records or medals, my goal is to enjoy the route. Be in the moment. When I’m not 100% at my level, I get upset despite the victory,” Janja agrees in an interview with Gym Climber. That is probably why she trains hard for her beloved sport and always performs at her peak level.

It’s not just the plastic walls, Janja has reigned in the outdoors by climbing two 9a’s. She eyed the famous route, Biographie (9a+) in 2017 when she was pretty close to sending it. Margo Hayes became the first female to climb the route before her in September 2017.

The secret recipe to success

With tremendous achievements, she may be known as a confident person who knows how to do it all. Janja believes the opposite though. After going 6/6 for Boulder World Cups in 2019, she shares her struggle on her Instagram profile.

Her post read, “I knew exactly what I had to do. *Deep breath. You got this*. Without thinking I went into the boulder. I stuck the dyno and found myself on the top. Whaaat? A billion thoughts crossed my mind. I thought about all the people who helped me get here.” She gets as nervous as anybody else and is able to calm herself the moment she touches the holds.

In another post, she writes, “There’s a moment when you feel the weight of the moment. So many questions, so many what if’s. And then there’s another moment just before the attempt…when you are in complete control when you say to yourself if not now then when?”

We can see her during her performances smiling in awe when she sticks a move. You can hear the commentators say, “She looks surprised she did that.” She just goes with a calm mind without expectations and loves the feeling of being on the wall. She tries to be in the present moment by enjoying the flow, the movements, she rarely notices the crowd cheering for her.

Every now and then when people are curious about her success formula. She asserts, “There is not a secret recipe. I just love climbing.” She opens up in an interview with Girlifornia, “I climb because climbing is a moment where I fall in love with life. There are no ways to cheat because when you are on the wall you are on your own.”

Olympic Gold – The best in the world

It is every athlete’s dream to win an Olympic gold medal. Finally the first time ever, sport climbing is an official sport in the Olympic Games in Tokyo 2020. Going into the games Janja was the hot favourite to win gold. And in typical Janja Garnbret fashion, she crashed the competition and went on the win gold. Cementing herself as the best in the world.